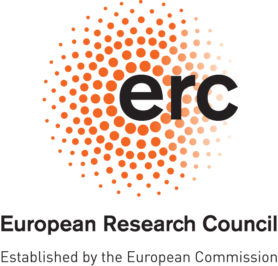 *This blog was originally published on the ARTECHNE website*

While in art history the potential of performative methods might not yet be fully realized, re-enactment, reconstruction, replication, reproduction or re-working, has become a complementary tool of historical inquiry across the wide domain of the humanities from the history of science and technology to archeology to musicology to conservation and restoration. However, cross-disciplinary reflection on performative methods has just begun, and it is to foster this transdisciplinary dialogue that in the past summer we have organized a NIAS-Lorentz Workshop in Leiden, bringing together several disciplines to discuss their experiences with performative methods and exchange practices and challenges.[1] I want to focus on one important lesson I have learned in exchange with anthropologists, who differently from the other invited disciplines do not have a historical agenda, but just for this reason provide new possibilities for the use of performative methods in the historical disciplines.

The use of performative methods in historical disciplines is often said to serve the elucidation of historical texts, from the names of materials or processes to the distillation of historical ontologies of materials informing the processes of writing the historical texts.[2] Expert makers and artists are invited to these projects; scientists collaborate in experimental history of science; reconstruction in conservation research involves restorers and conservation scientists. While there is nothing wrong with defining re-enactment as reading method, it also constrains the scope and depth of the contribution of expert makers to making the historical text intelligible. 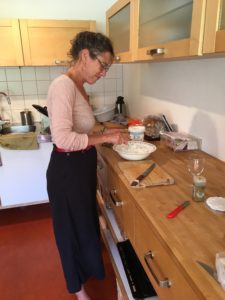 historical text to make sense of. At the NIAS-Lorentz Workshop on performative methods, under the guidance of Ruth Benshop, we re-did an ethnographic experiment which was originally performed in Amsterdam by a group of anthropologists headed by Annemarie Mol.[3] The aim of the experiment was to set light on an issue on which the anthropology of the senses was silent, that is, the issue of tasting not being an activity confined to the tongue but one that extends to the fingers. The ethnographic experiment brought together a group of people, who bought the ingredients and gathered in a kitchen of an apartment in Amsterdam to collectively prepare, cook and eat a meal with their fingers. The experiment, as the anthropologists explicitly stated, was not set up to study the body and the sense of taste; it did not deliver “general knowledge about tasting fingers”, but 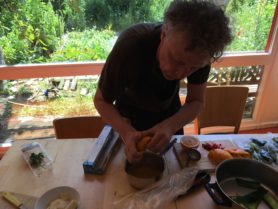 “a particular configuration of what tasting fingers may be” in which the challenge is to articulate this sensation. Participants in the experiment mixed the roles of researcher-subject and object of research, mixed being the lab technician and the guinea pig. They called the singular event in which they engaged an experiment, but differently from the ready association with a laboratory experiment, there was no protocol.

The group of participants in the experiment had different cultural backgrounds, and while some 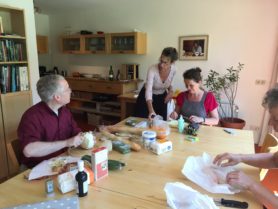 were novices, others were experts in eating with their fingers. A good part of the experiment was about learning to eat with one’s fingers, requiring bodily techniques which depended upon different consistencies and textures of foods. “The experiment staged reality. It staged a strange bodily practice (for the novices), or staged a familiar practice in a strange way (for the experts).” And as the participants in the dinner observed, “it was not the same event for each of us. For the experts, there was a challenge in articulating the familiar; for the novices, finger-eating was a transgression – 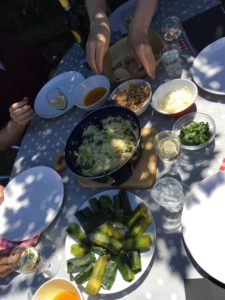 pleasant, awkward, or both.” Interestingly, in contrast to their confinement to the interpretation of historical texts on which the historians are experts, in the staged reality of the ethnographic experiment, expert makers (or eaters) meet the novices (here the professional anthropologists) on an equal level; they bring different techniques and bits of knowledge, and learn from each other.

It is this model of cooperation with makers which we have explored in the use of re-enactment in the ARTECHNE project in the past year as we have restaged a reality, not of a dinner in our case, but of an apprenticeship. We have placed a novice (Thijs Hagendijk, one of my Ph.D students, read his blog How to Read here) in a workshop (a modern conservation studio with partly historically reconstructed tools and equipment in the Atelier Building in Amsterdam), together with a master craftsman (the metal conservator and silversmith Tonny Beentjes) in the presence of a historical manual. It is this ahistorical staged setting which allows us to think and raise questions not so much or only about the meaning of the text, but about what was done with the text in historical processes of learning. This is a reflection on Thijs’ learning process as much as on Tonny’s pedagogy. The re-enactments also help the expert maker to reflect on his own pedagogy, which feeds back in to the teaching of the maker, outside the context of the re-enactment; thus, there is something to gain here for the maker and the historian.

Yes, this is a plea for the adoption of the ethnographic experiment in art history, and the historical disciplines. I see it as added value that it also allows for more equally balanced collaborations between makers and historians. I do not expect you to share my enthusiasm, but I do hope to convince you of the need of an interdisciplinary dialogue on performative methods in the humanities. It is to foster this dialogue that the organizers and participants of the NIAS Lorentz workshop establish the RRR Network; if nothing else, I hope that it makes possible more fruitful encounters and discussions as the one I had with the ethnographic experiment during the workshop.